Lesser-known Natural Wonders in the UK

< The List
Credit: The Luxe Nomad for The Travel Insider
September 2019

Mention the UK amidst travel chatter and listen as the conversation revolves around big cities like Manchester, London, and Glasgow. Shopping is somehow always at the tip of the tongue, with some mention of cathedrals and castles, and giant circles of rocks such as Stonehenge for a taste of culture. Also, the weather is always mentioned - twice!

And yet, these islands are home to some of the most dramatic, treacherous, otherworldly, and awe-inspiring backdrops in the world. Riddled with centuries of folklore, legends, and myths, it’s the kind of backdrop that the likes of Tolkien have built worlds upon.

From England, Scotland, Wales, and Northern Ireland, here are some of the UK’s natural wonders, and the interesting tales they tell.

This unassuming, bubbling stream is part of the River Wharf. Some parts of the stream are extremely narrow, flowing between mossy covered rocks, whereas other bits are much wider. You can jump over parts of the stream -- people occasionally do, but if you miss that jump, this picturesque stream hides a series of naturally formed booby traps just underneath.

Where the river is wide, the water flows normally, but there are abrupt changes in the orientation of the flow and water is forced to flow vertically instead of horizontally through rock shaft. The deceptively deep and powerful currents have carved out caverns and tunnels beneath the rocks along the curving shore where debris, and the unfortunate person, are trapped.

This formation of rocks along the coast of Dorset marks the most easterly point of the Jurassic Coast, a UNESCO World Heritage Site. The rocks are made from chalk, which is the buildup of plankton and other microorganisms, with some bands of flint created over millions of years. Constantly carved out by erosion, these pillars will eventually disappear over time, and even newer ones will appear.

There are several stories as to how Old Harry got its name. The obvious is the age-old euphemism for the devil, “Old Harry”, but there are also stories of the pirate and smuggler, Harry Paye, stashing his loot somewhere near these rocks in the late 14th and early 15th century. Yet another tale has it that a ninth-century Viking raid was thwarted by a storm and that one of the drowned, Earl Harold, was turned into a pillar of chalk. 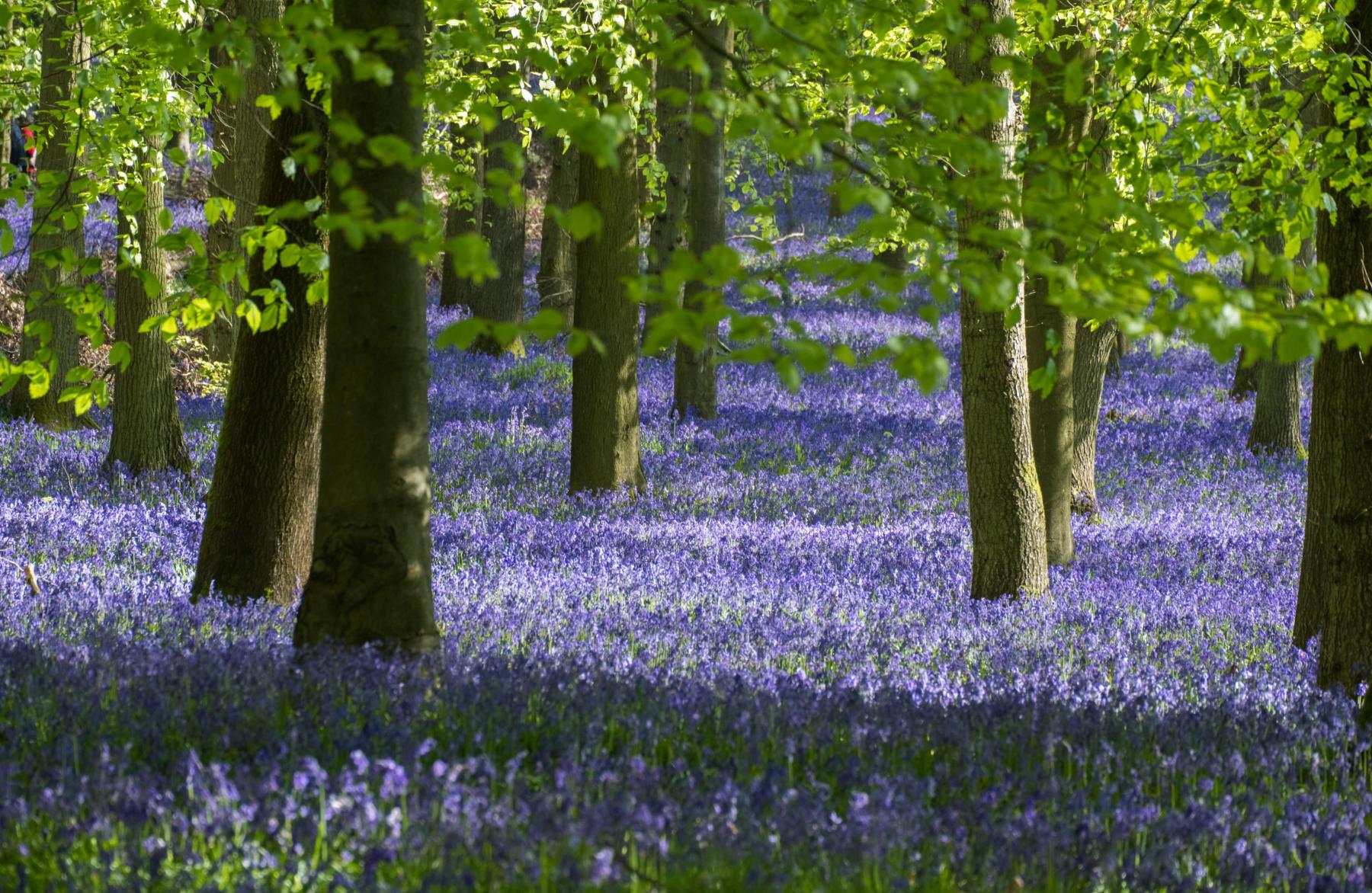 Every spring, from late April to late May, native English bluebells carpet woodland floors all over the UK. The blooming of these delicate wildflowers creates a naturally occurring spectacle with shades of blue and purple. Looking up bluebells will probably bring you to the 5,000 acres of the Ashridge Estate in Hertfordshire, Dockey Wood; however, Rannerdale in Lake District between Lake Buttermere and Crummock Water hides a secluded valley with a great legend.

The local legend tells a tale of a battle between local settlers and Norsemen against Norman invaders. By some trickery, the invaders were lured into the hidden valley where they were subdued. The bluebells spring up everywhere blood was spilt. 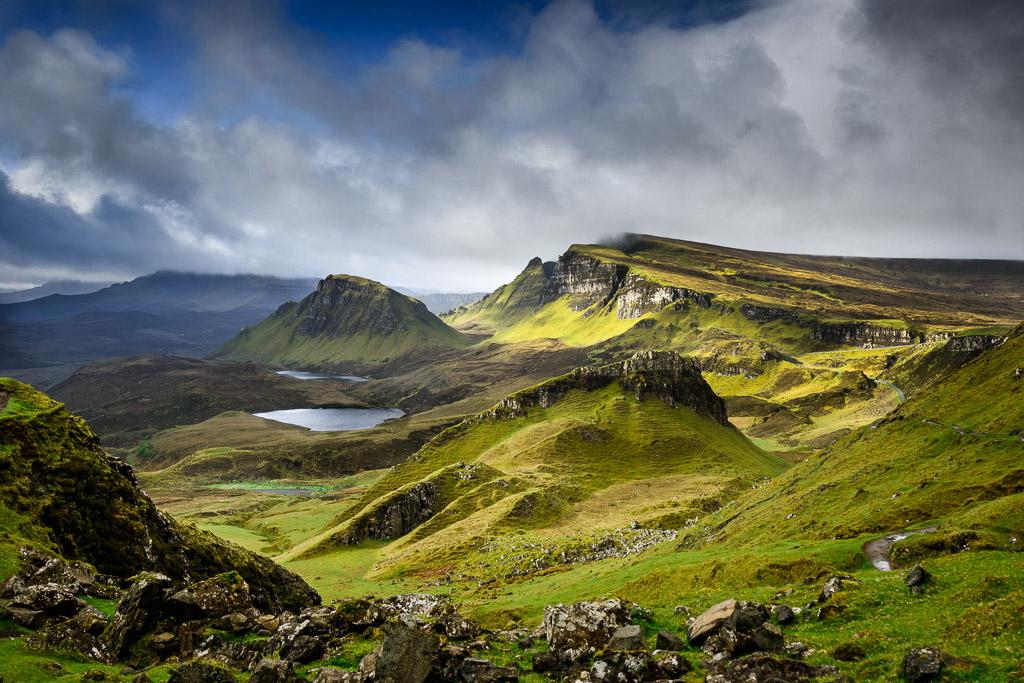 The Quiraing is a 6.8 km walking loop that takes you through some of the most spectacular sights on Scotland’s Isle of Skye. It’s part of the Trotternish Ridge, and here you will find high cliffs, hidden plateaus, and little lakes. This craggy landscape was formed by one of Britain’s largest landslides.

Many people hike a short section of the path, where you’ll find quaint rock structures with quirky names such as Prison, which looks like fortress walls from a particular direction, Needle, and Table, among others.

The Old Man of Storr

Also located on the Isle of Skye but a way south, The Old Man of Storr is a steep rocky formation overlooking the Sound of Raasay. It stands out against the gentler grassy slopes where most daytrippers wander. It is possible to ascend this spot though it is treacherous, with lots of loose rock and a severe incline. The pinnacle was first climbed in 1955 by legendary mountaineer Don Whillans.

The story goes that this 160-foot rock formation was part of a giant’s hand. Laid to rest here upon death, the ‘old man’ is the giant’s thumb, which was left partially unearthed.

The name comes from the Vikings, “Wurm” or dragon for its snaking serpentine profile. The tidal island is connected by a two-mile-long causeway. The causeway holds many wonders from natural caves and blowholes to the spectacularly jagged Devil’s Bridge that connects the Inner Head to the Low Neck.

The Worm’s Head is now protected as a National Nature Reserve by the National Trust and the Countryside Council for Wales and is home to huge colonies of nesting seabirds from March to August. The land is very fertile, and though one man successfully grew a crop of potatoes here, it was quite impossible to get the crops back over the razor-like rocks.

The drowned forest of Borth

This 4,500-year-old ‘forest’ looks like rocks lying on a beach, but they’re actually petrified wood. The location of these stumps is a well-known secret as it is normally hidden under a layer of sand. These stumps dot the shore intermittently for two to three miles between Ynys-las and Borth.

Preserved by the anaerobic nature of the local peat, the wood has been identified as pine, oak, and birch. The forest has also become associated with the longstanding myth of a sunken civilisation known as Cantre’r Gwaelod, a sort of Welsh Atlantis.

These thousands of interlocking hexagonal columns that rise vertically like steps is a geological oddity that most would assume to be man-made. The rocks are actually formed by volcanic activity. The molten basalt that came into contact with chalk beds formed a quick cooling lava plateau that contracted and cracked, shaping these unique giant stepping stones.

Legend has it that an Irish giant constructed the causeway himself so he could skip over to Scotland to defeat his Scottish rival. Somehow, the Irish giant fell asleep halfway, and his wife wrapped him up in cloth to camouflage him as their child. When the Scottish giant came looking, he saw the bundle which he assumed was a large infant and hightailed it back to Scotland, imagining how huge his Irish rival must be.