The time to visit Japan has returned! Experience some of the country’s most iconic attractions to update your IG feed because if it isn’t on social media, did you even go? Here are some recommendations on where you can get the best angles for that professional looking photo of Tokyo Tower, Mount Fuji, Shibuya Crossing and more.

Tell anyone you’ve been to Tokyo and they’ll enthusiastically quiz whether or not you managed to see Mount Fuji. Not in Tokyo, of course, but nearby in Kawaguchiko — where the best views of Fuji-san are at!

On a clear day, you can photograph Japan’s tallest mountain from virtually anywhere in Kawaguchiko. Chances are, you’d realise that everyone flocks to the Natural Living Center for that, since the sightseeing shuttle bus takes you there.

But experience tells us that Kawaguchiko is best enjoyed as a road trip, and another vantage point you can view Japan’s icon from is the Chureito Pagoda (there’s even a designated photography spot) — after a 396-step walk up, that is! Up for the challenge?

Asakusa is one of Tokyo’s oldest neighbourhoods, and its most iconic attraction, the Senso-ji is also Tokyo’s oldest temple. The entire complex is massive — flanked by huge lanterns, beautiful ceiling paintings and statues of deities — and is as close to a traditional heritage experience as you can get in a modernised city like Tokyo.

While everyone is fighting the crowds to take that one unobstructed selfie in front of the main entrance’s gargantuan lantern, try this aerial shot out instead from the Asakusa Tourist Culture Information Center right opposite it. Besides snapping a bird’s eye view without jostling with other eager tourists, you can even catch the sunset with the Tokyo Skytree photo-bombing in the background, but in a good way! 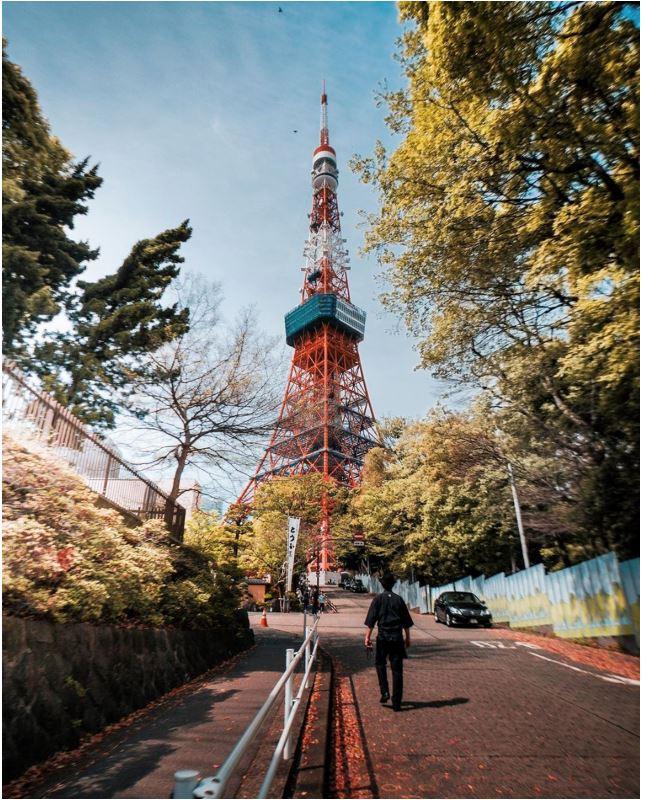 It’s hard to miss the Tokyo Tower even from tens of miles away. Japan’s answer to Paris’ Eiffel Tower can be captured in many ways, usually from one of the many sky-deck observatories around the capital. But don’t be shy and get close to it for a more dynamic shot! The beauty of this icon deserves to take centre stage in your photograph ;) 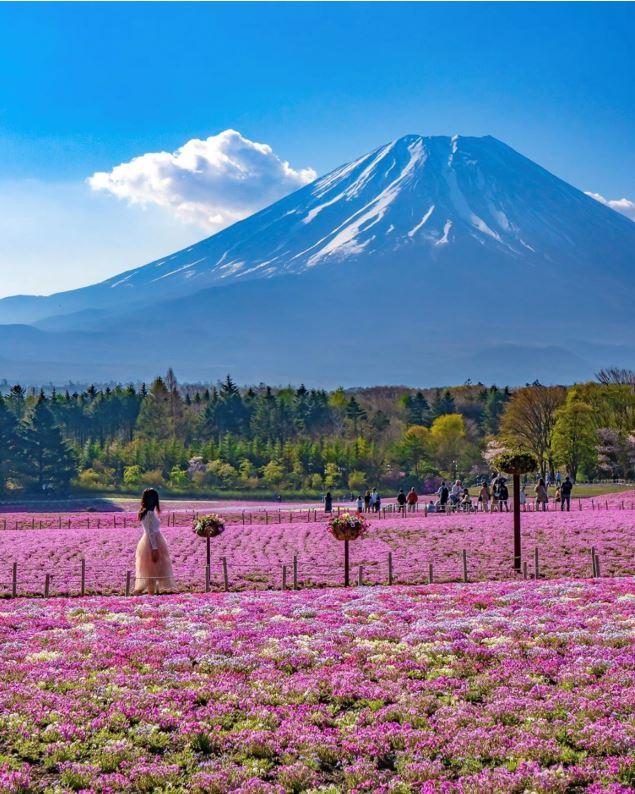 The view of an expansive carpet of 800,000 shibazakura (pink moss) is just majestic with Mount Fuji juxtaposed in the background. The Shibazakura Festival runs from mid-April to late-May every year near the Fuji Five Lakes, with an elaborate festival ground that has food stalls, cafes, performances, and photo opportunities aplenty. There’s even a footbath you can soak your feet in, while simultaneously soaking in the landscape of blue, pink and green!

You could easily spend an entire day here taking pictures among the pink moss, or from an observatory deck (that’s more like a bridge). 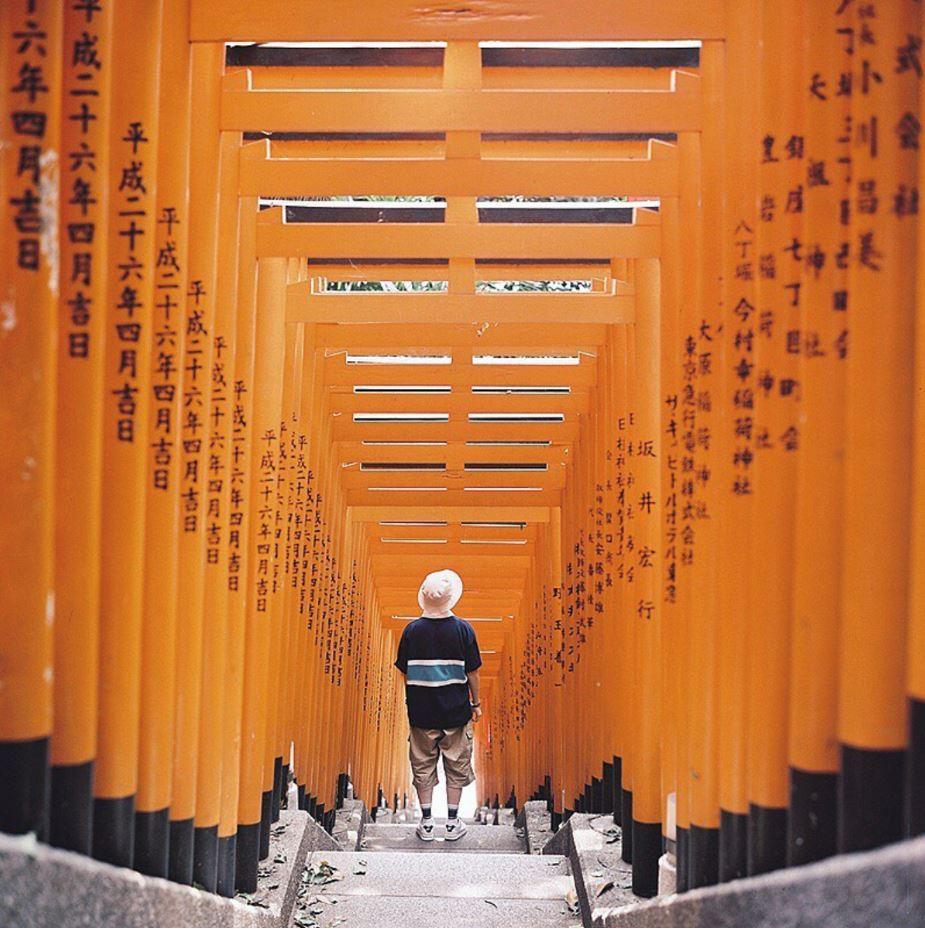 Kyoto vibes, without being in Kyoto?! Fret not if you can’t make a trip to Kyoto to see the famous Fushimi Inari Shrine and its 1,000 torii gates. The undiscerning eye could easily mistake Tokyo’s Hie Shrine for the real deal! In fact, the steep and narrow staircase might add a cooler dimension to your photo.

At the end lies the shrine of the god of Mt. Hie, known as the Oyamakui-no-kami, and it’s only a three-minute walk from Akasaka Station on the Tokyo Metro Chiyoda Line. The best part? No crowds! 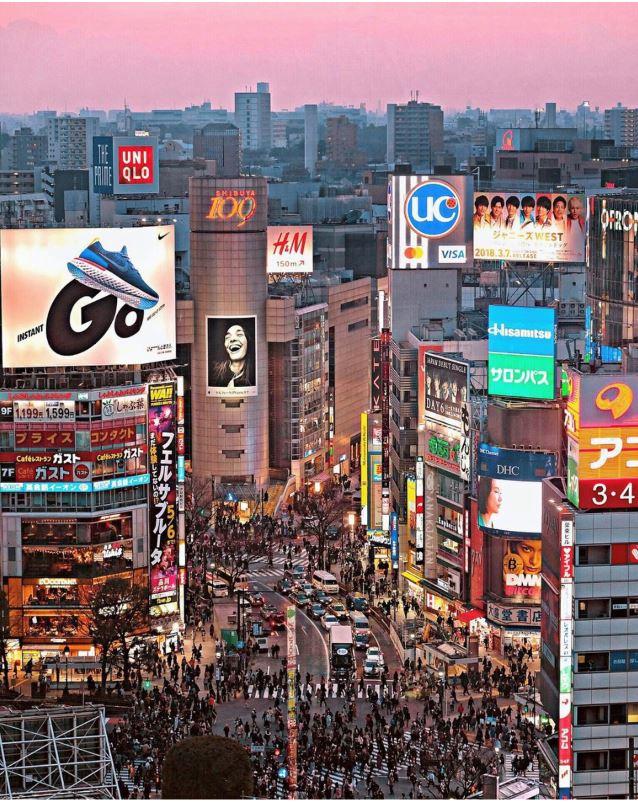 Japan’s iconic Shibuya crossing needs no introduction. But you might want to reconsider taking a good shot if you’re thinking of heading up to Tsutaya’s Starbucks — it’s virtually impossible to get a counter seat there, and standing around would probably draw the ire of both visitors and Starbucks staff trying to move around the already-cramped space!

Another place you could get a good shot of the crossing is from Shibuya Hikarie Mall’s Sky Lobby, located on the 11th floor. You don’t even have to pay for entry (or coffee)! 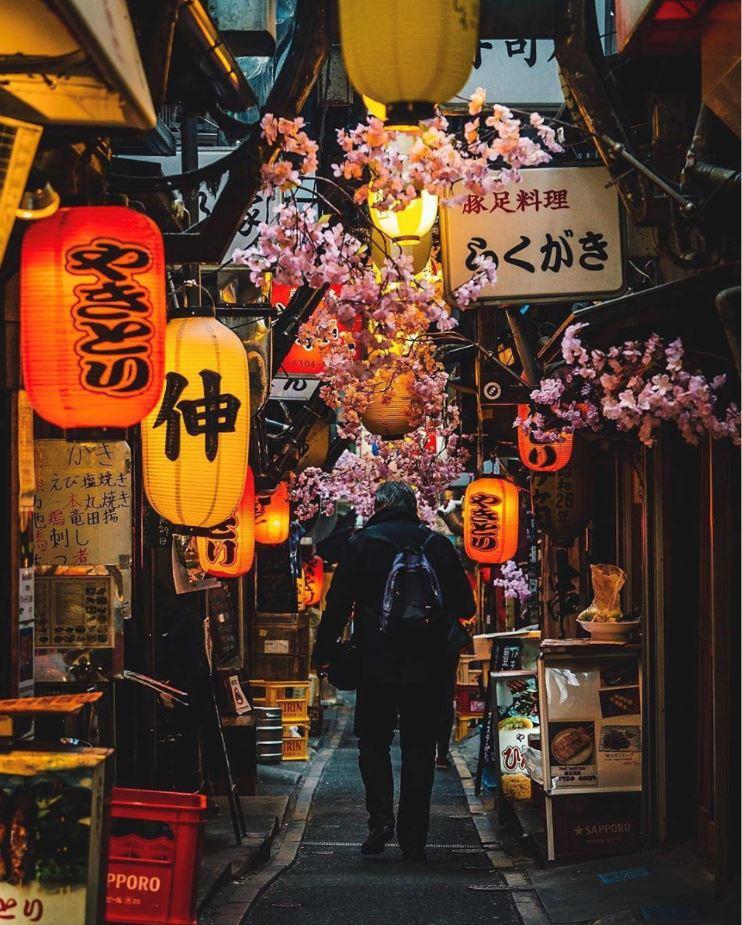 Thankfully, Omoide Yokocho (which translates to ‘Memory Alley’) no longer lives up to its former nickname as Piss Alley (it was known for not having toilets back then). These days, the Japanese would relate Omoide Yokocho with “natsukashii” instead, which means, “how nostalgic!”

This narrow alley retains its original charm from the yesteryears, and lets visitors step back into the Showa era, lined with little yakitori eateries, bars and other food stalls. So plan your little photoshoot to allow time for some indulgence afterwards! 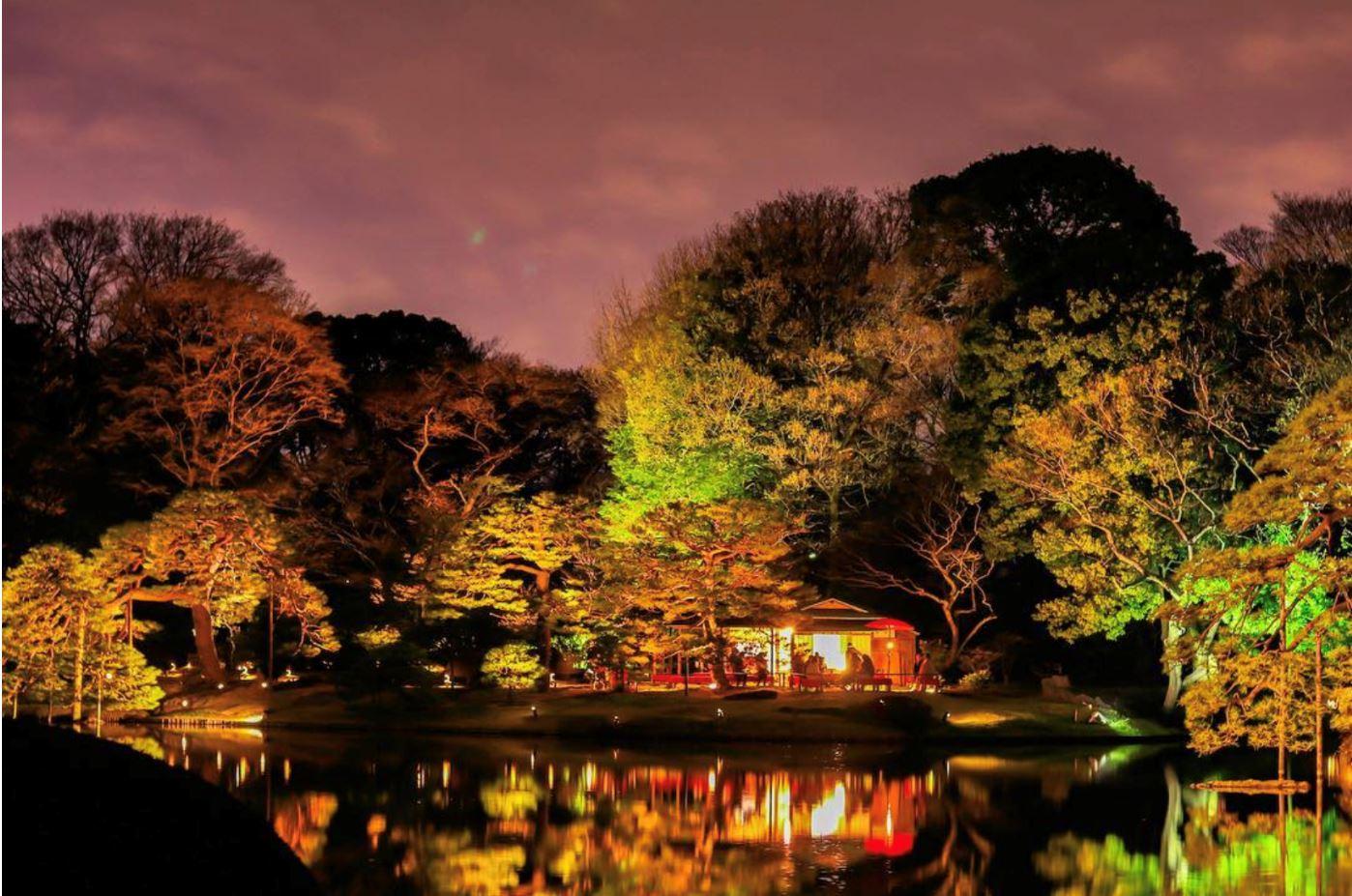 Tokyo has many spots to view cherry blossoms from, but another one many might not know of is Rikugien Garden — a beautiful landscape garden that’s been around since 1700. It literally translates to “garden of six poems”, because the entire compound serves to recreate 88 scenes from these famous poems.

Rikugien Garden is perhaps even more famous as an autumn hangout to view the foliage. From late November to early December each year, the garden illuminates after sundown to create spectacular night views. Looks like gardens aren’t just a daytime attraction! 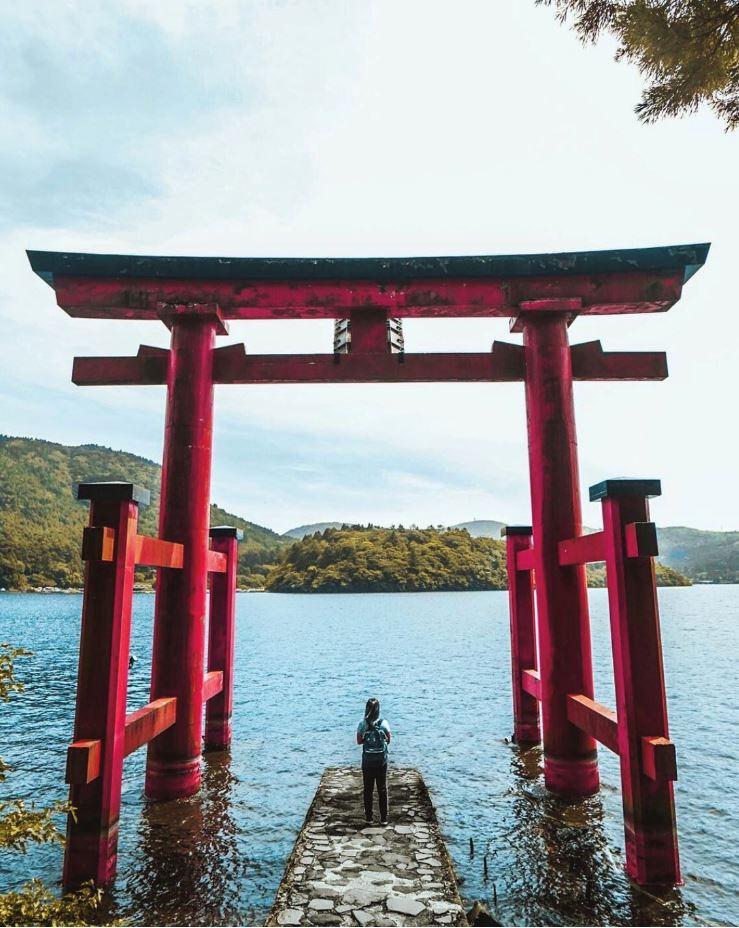 This onsen town less than two hours from Tokyo is perfect to get away from the city for a bit and immerse yourself in nature! The Hakone Shrine’s grand torii gate is usually the starting point for everyone’s Hakone itinerary, right on the edge of Lake Ashinoko (you’ll have to climb a flight of stairs down to get to this photo spot). Simply take the Hakone Tozan Bus to the Moto-Hakone Boat Pier.

If time permits, explore the actual Hakone shrine besides simply taking a picture! The actual shrine complex is huge.

UOB Cardmembers can enjoy a variety of Travel Insider Escape deals! From flight bookings with Emirates, Qantas and Qatar Airways, to 15% off accommodation bookings with Agoda, Booking.com and Expedia or activity bookings with Klook or Trip.com, there’s something for everyone and more. Last but not least, don’t forget to purchase Travel Insurance!

Don’t have a UOB Card? Find the right credit card for all your needs here.

This article was first written in September 2019 and updated in October 2022.