Taiwan’s High Speed Rail system makes it easy for you to zip back and forth between Taipei and Kaohsiung in less than two hours. But it also means that hidden gems like rural Taitung along Taiwan’s east coast tend to get passed over by tourists looking for the hip and cool in Taiwan. there are plenty of gems to be discovered in Taitung if you know where to look and here are 3 to get you started. 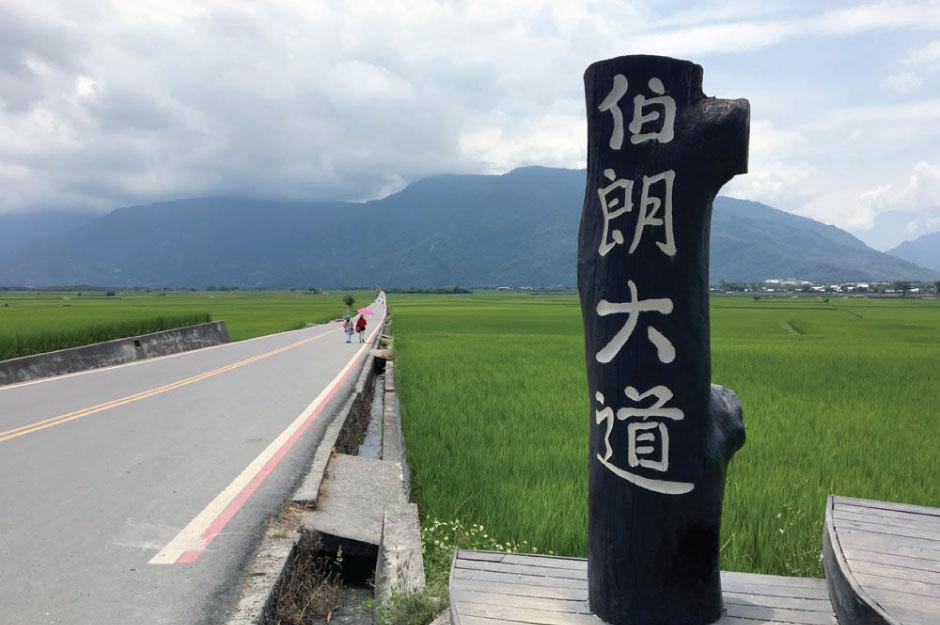 Taitung is known for its farms and agriculture, and especially for Chishang’s famous rice. Renting a bicycle and cycling around town is one of the best ways to see Chishang - one road you have to check out is Bolangdadao, or Mr Brown Avenue, named for a Taiwanese coffee brand that made Chishang famous by filming a TV ad in the 90s right here on this road. It has lovely flat rice paddies that stretch to either side of this scenic road with no lamp posts or barriers to block the view, and a continuous mountain range looming in the distance, a picture-perfect spot when the weather is right. 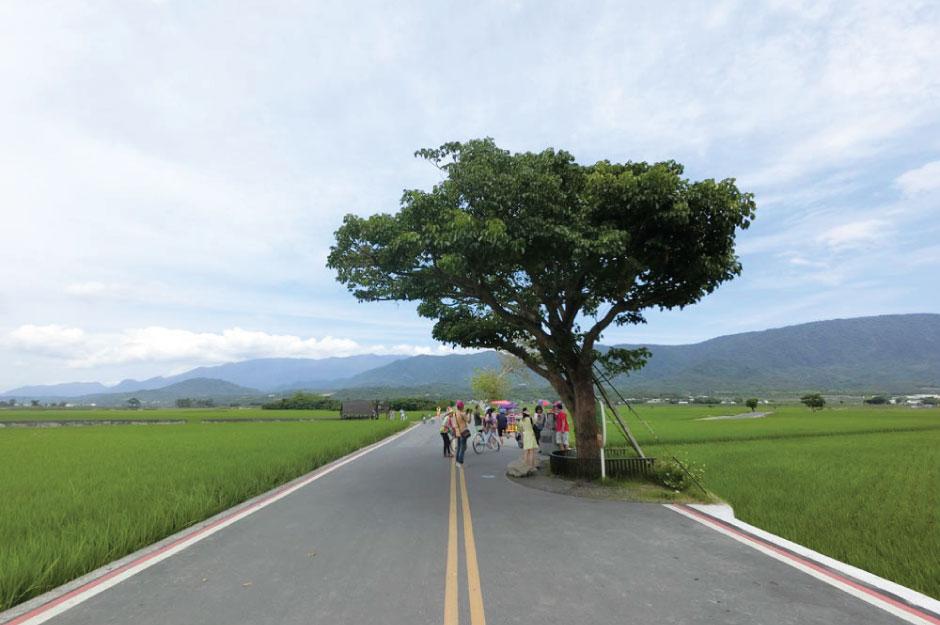 Mr Brown Avenue is especially renowned for the ‘Takeshi Tree’, named after the actor Takeshi Kaneshiro who appeared in an EVA Air advertisement cycling through the lush fields and having tea under this tree. Sadly the tree has been struck by disease so it is a little fragile, but you can still pretend to be a star under this tree… if you can get here before all the other tourists do. 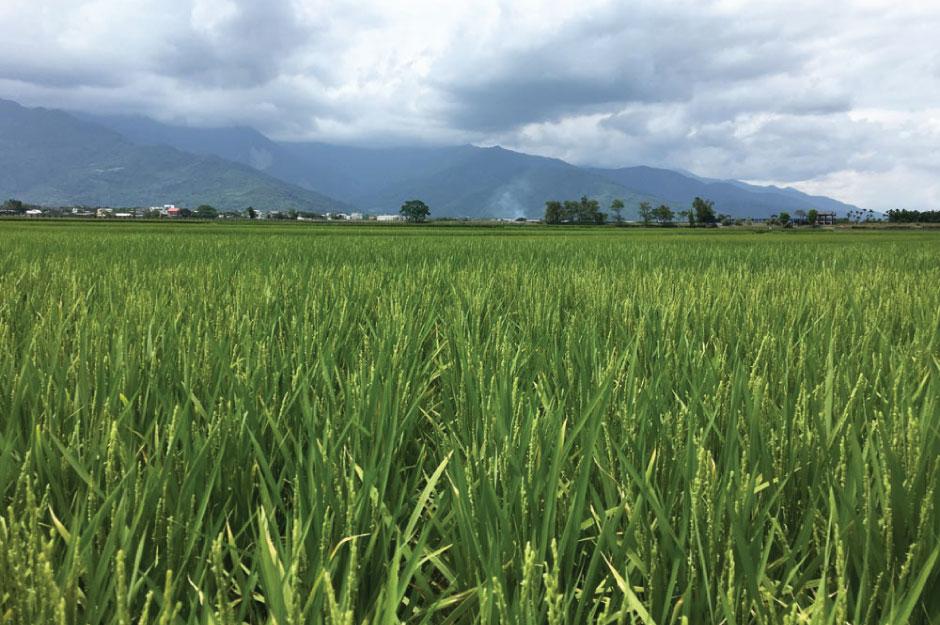 The rice fields are either a brilliant green or a soft yellow depending on which season you visit and whether the rice has been harvested. Look out for viewing points around the area where you can climb up and enjoy a higher viewpoint of the rice fields.

*Protip: In Chishang, no one eats biandang 便當, what Taiwanese generally call a bento box with rice and ingredients. Do as the locals do and call it a fanbao 饭包 - it comes in a traditional wooden box with a special certification mark attesting to the high quality of the Chishang rice. 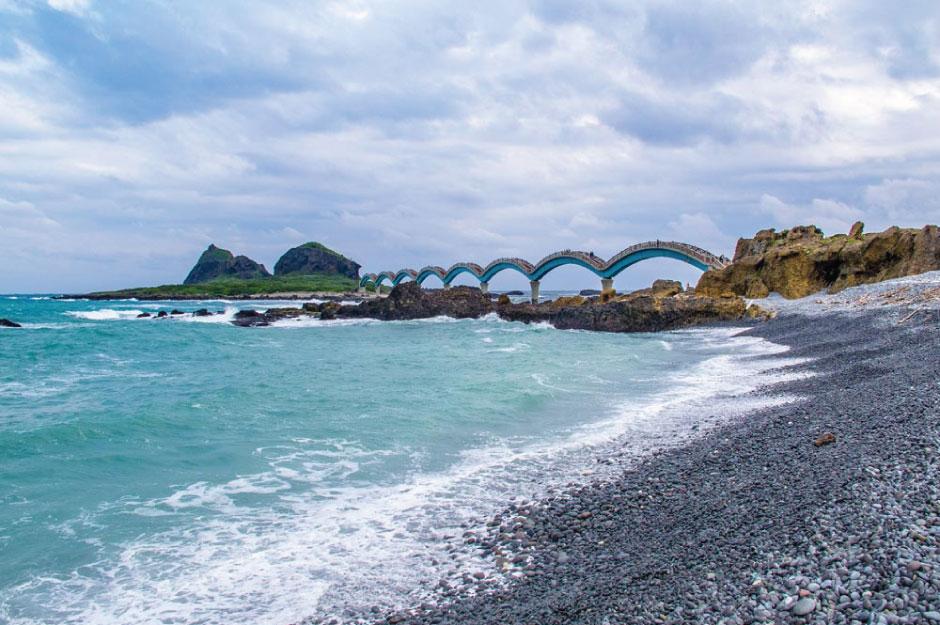 This beautiful 8-arch bridge is probably one of the most iconic and scenic spots in Taitung. The bridge connects the mainland to a little island just off the shore with three big rocks on it. A popular legend states that the three large rocks you can see on the island are actually the footprints left behind by three deities Lyu Dongbin, Li Tieguai and He Xiangu, which is how this place was named Sanxiantai, or the three immortals platform. A less sexy and more scientific explanation is that the seawater eroded what was once a headland into its own island. 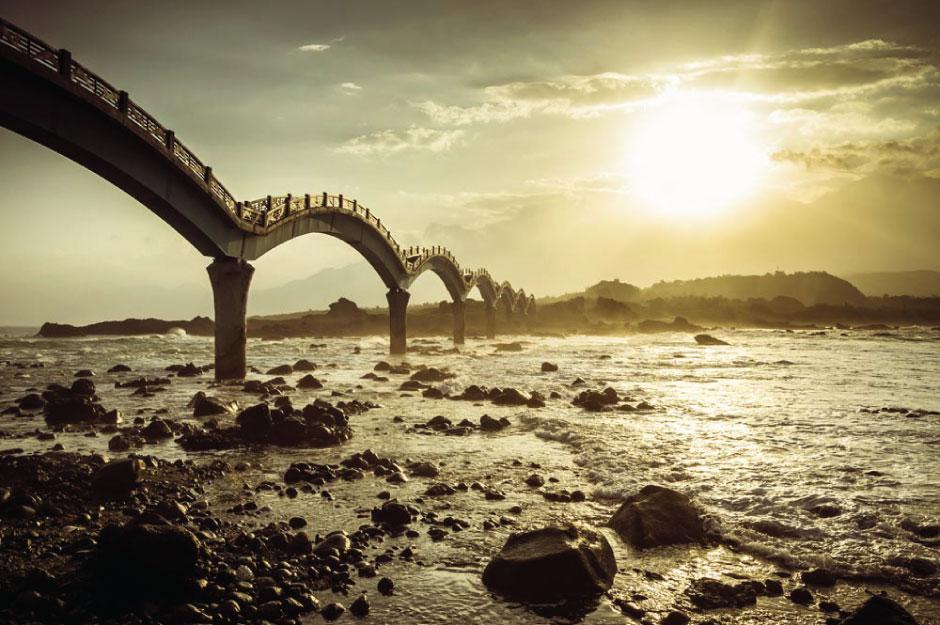 Before the bridge was built in 1987, you could only reach the island during low tide when it was safe to wade across the water. On the rock named for Lyu Dongbin, you can find the oldest lighthouse built along Taiwan’s east coast. Built in 1915, it gives you a great unblocked view of the bridge from above which looks quite different when seen from ground level. If you rather not spend that effort climbing, viewing the bridge from the black pebble beach on the mainland lets you have a nice look at the waves splashing between the arches. 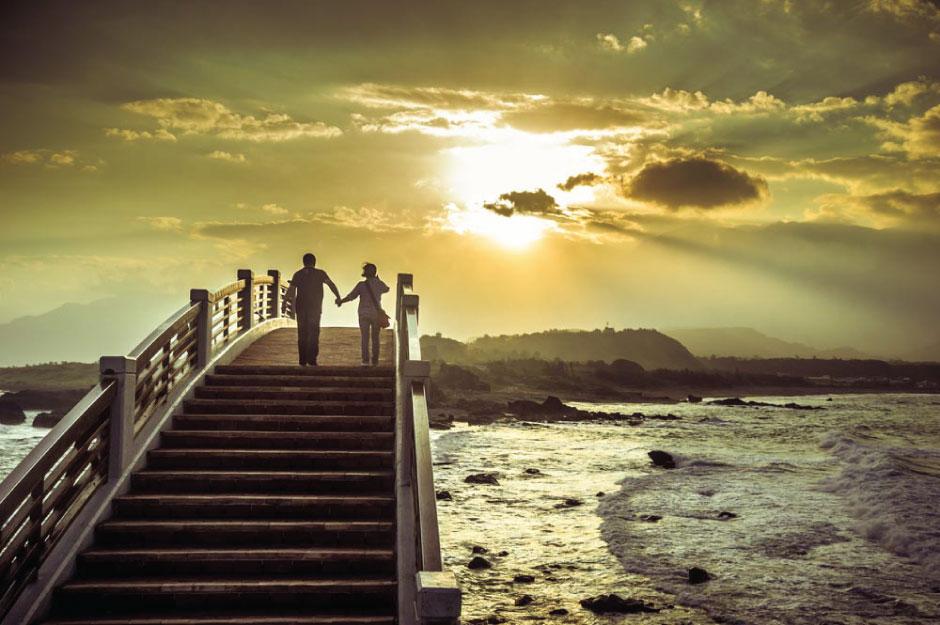 The island is a protected nature reserve and its surrounding waters are rich in biodiversity. The arches of the bridge were built to mimic that of a dragon’s undulating body, and also intended built to prevent any vehicles from accessing the island and spoiling the fragile ecosystem. There are paths that you can walk on to explore the island and get a closer look at its flora and fauna - the three ‘treasures’ of Sanxiantai are the endemic Taiwanese date palm, white dogwood, and bay bean - the latter is quite rare to see in other parts of Taiwan. 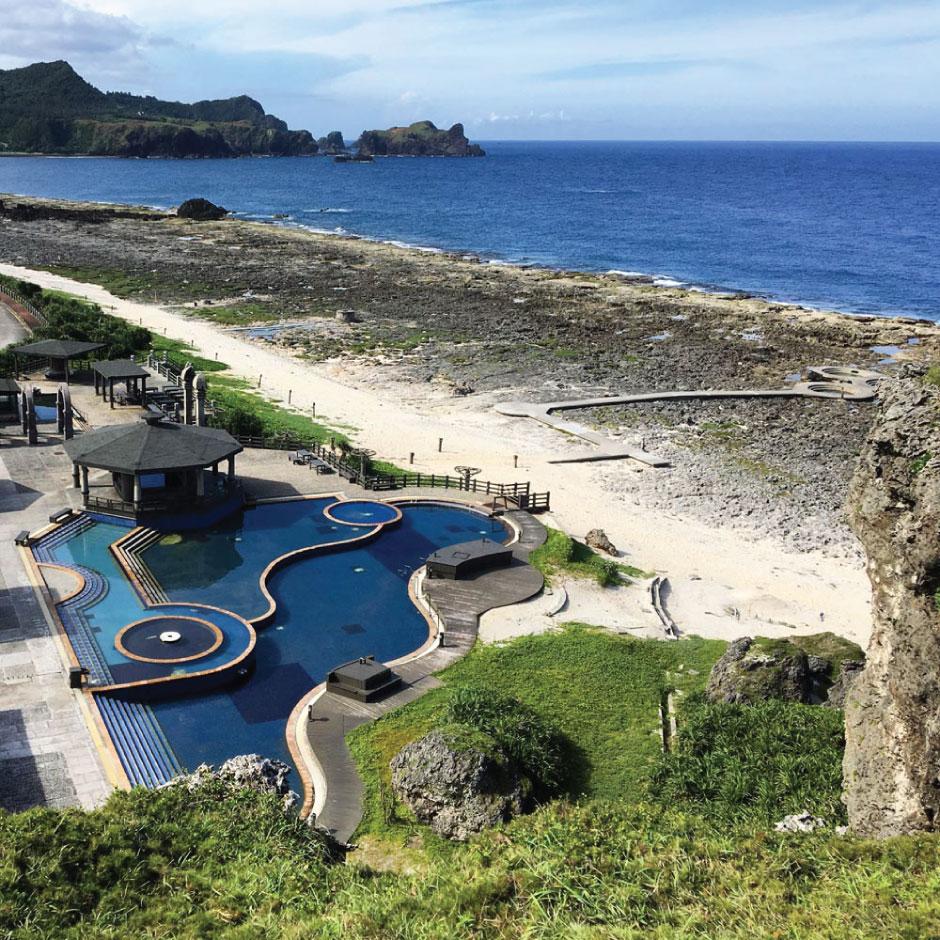 If you love Taiwan’s hot springs, then you have to make a trip to Taitung to visit one of only three saltwater hot springs in the world. Green Island or Lyudao is one of Taitung’s offshore islands and on its southeastern corner you can find this rare hot spring which is perfectly situated for you to catch the sunrise while soaking in hot salty water. 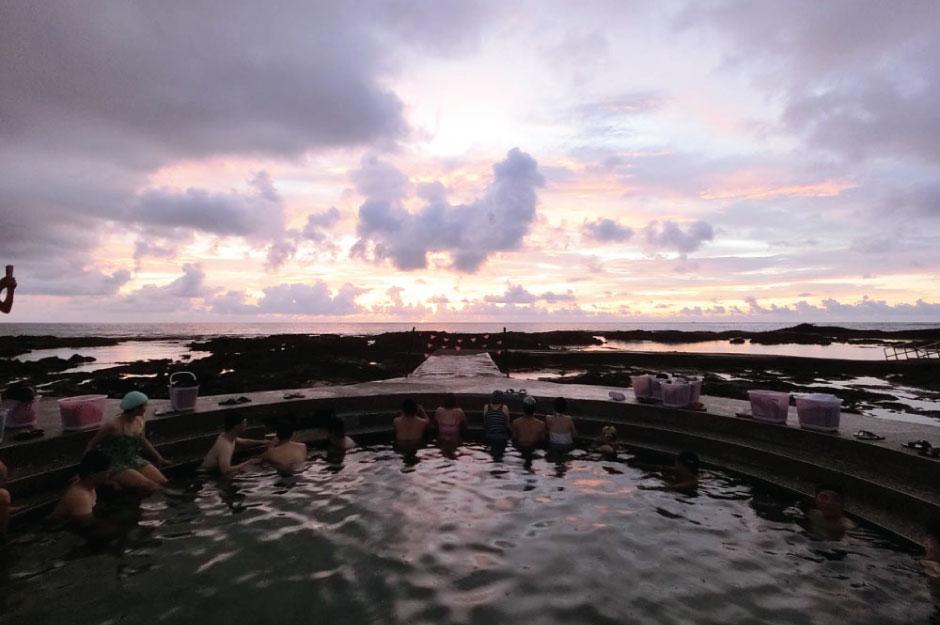 The Hot Springs open at 5am just in time for sunrise. The tour groups and crowds come in just before sunrise at around 6am, so be early if you want to save yourself a good spot. The water is hotter in the upper level pools and indoor pools, but the outdoor stone paved pools give a more natural experience under the open sky, and you are closer to the sea as well. 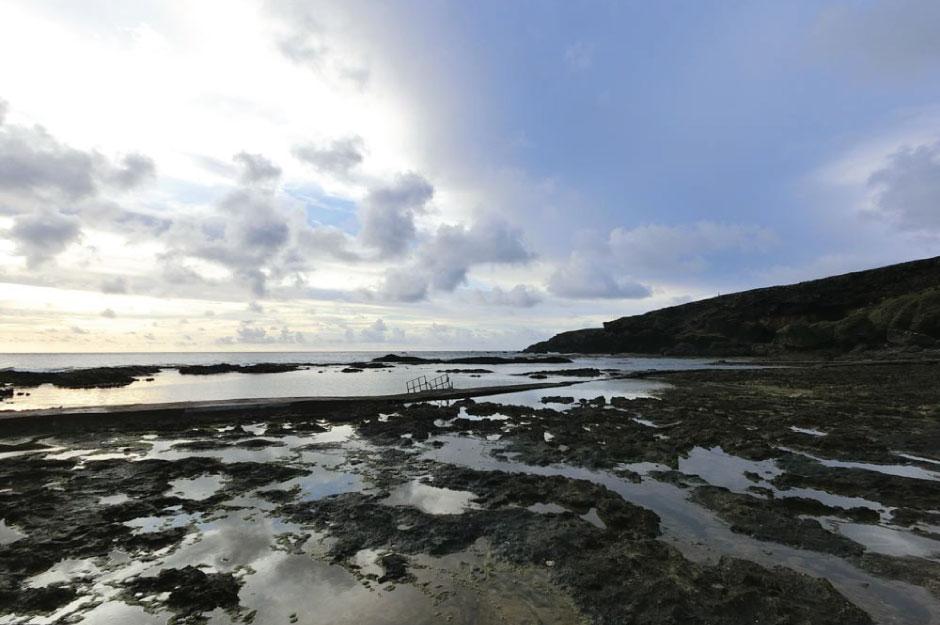 Most people are here purely for the sunrise and leave once the sun is high enough in the sky - linger a little longer to enjoy the serenity of the hot springs without the crowd. It will still be ridiculously early, so you will have plenty of time to take a nap later or go about your day. If you prefer a less crowded pool, consider coming back to the hot springs at night when it is dark to do some stargazing instead - there is little light pollution on Lyudao which should give you an excellent view on a clear night.

How to get there:
Lyudao is a 1 hour ferry ride from Fugang Harbour in Taitung, or Houbihu Harbour in Kenting. You can take a 15 minute flight from Taitung airport if you get seasick, but it costs more and has very limited capacity. Details here.

*Protip: Enjoy a lovely meal cooked by hot spring waters after your bath - you can buy raw eggs, prawns or vegetables from the little shops in Nanliao near the port. Tell the shopkeepers it’s for the hot spring and they will give you small red netting bags which you can use to suspend your food in the hot water. Don’t bring it into the bathing pools with you though - there is a separate trough with extra hot water nearby that’s just for cooking.

These three spots in Taitung are just some of the surprises you can find along Taiwan’s east coast if you are willing to take the time to explore. There are buses, trains and ferries to get you around Taitung, though driving or even cycling this scenic area might be more efficient ways to reach some of these more out of the way spots if you are short on time.