72 Hours in Berlin: See the Best of Berlin on Foot

If we could only recommend one city in Germany, it would be Berlin. Germany’s capital is a historical city, but it’s also gritty yet glamorous, full of nooks and corners where you can peer into its storied history and explore its vibrant culture.

Berlin is also relatively flat and pedestrian friendly, and what better way to see a city than on foot? Sign up for walking tours to make the most of your time, and let experienced guides do the navigating. They’ll also tell you stories about Nazi Germany, the Cold War and Berlin’s alternative culture after it emerged from behind the Iron Curtain – highlighting sights you might otherwise stroll past.

Here’s the best way to take in Berlin on foot if you only have 72 hours to see it all. 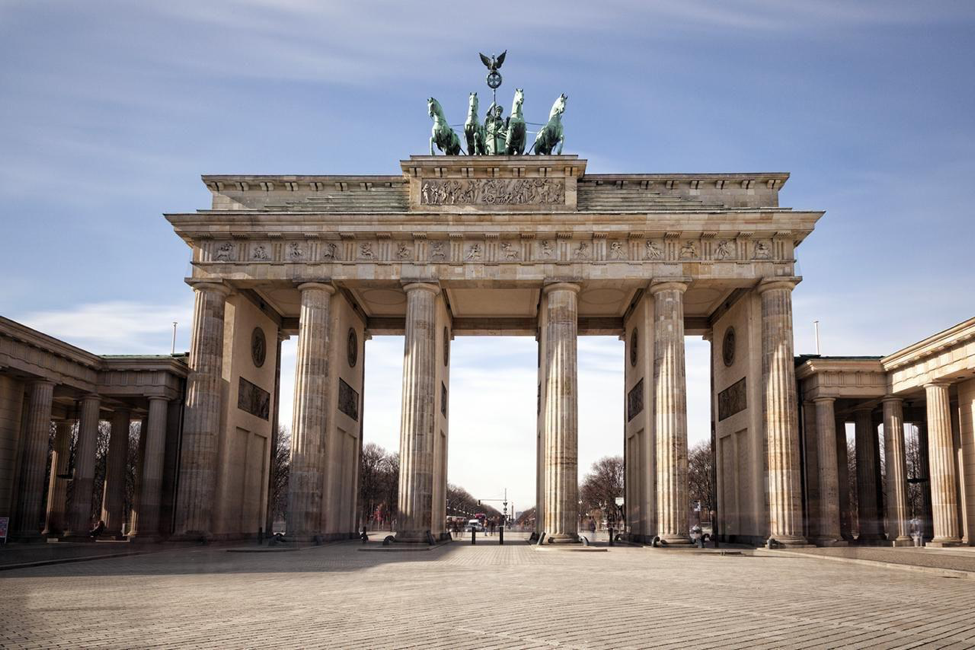 Hit the ground running on day one with a free walking tour by Sandemans. The company is well-known for slick and professional walking tours that cover most of Western Europe. Best part? It’s (almost) free. Guides work for tips, and you can decide how much to contribute after the tour.

We recommend starting with this tour as it helps frame Berlin’s history on a timeline, so you can better appreciate the sights that come later. It’ll also help you familiarise with the city, and cover main sights such as the Brandenburg Gate, Holocaust memorial and Berlin’s Reichstag, or Parliament.

Price: Pay what you wish

Address: Tours meet in front of Starbucks at the Brandenburg Gate (S/U-Bahn Brandenburger Tor). Look for guides with red umbrellas and Sandemans T-shirts. 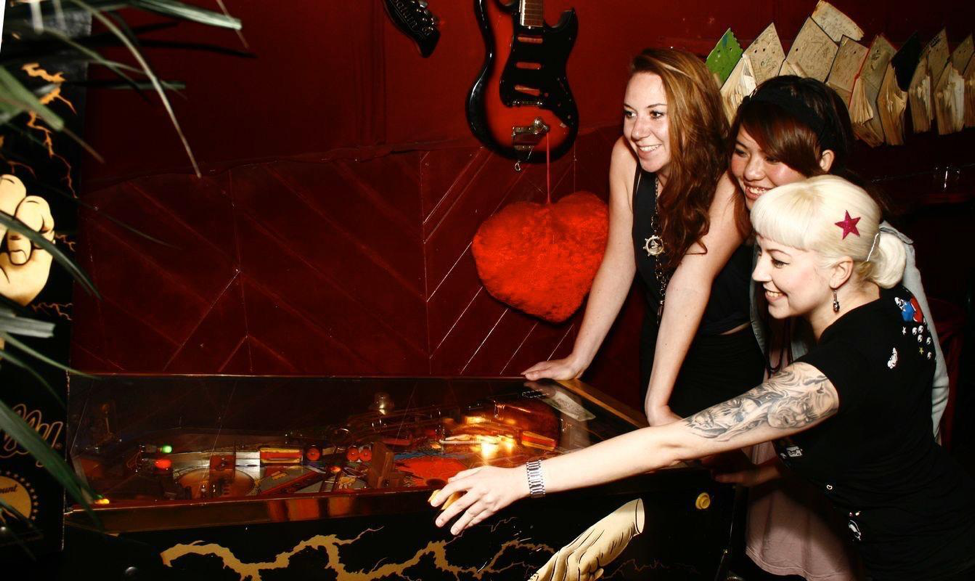 An alternative pub crawl
Image credit: Like a local guide

Berlin is known as an alternative city, and what better way to see it than by hitting up its watering holes? Pub crawls are dime a dozen throughout most of Europe, but we like how the 666 Anti Pubcrawl by Alternative Berlin Tours introduces under-the-radar pubs we’d be hard-pressed to find on our own.

Tour guides decide on the itinerary depending on the group’s size and interest, including stops such as Berlin’s oldest bar from Soviet times, a ping pong bar, and an electronic dance hub. Large, rowdy groups such as stag parties are discouraged from joining the tour, which helps solo travellers and small groups interact more easily.

Opening Hours:
Tour runs at 9.00pm daily
Tour can be either booked online or tickets can be bought at the meeting point
Limited places available 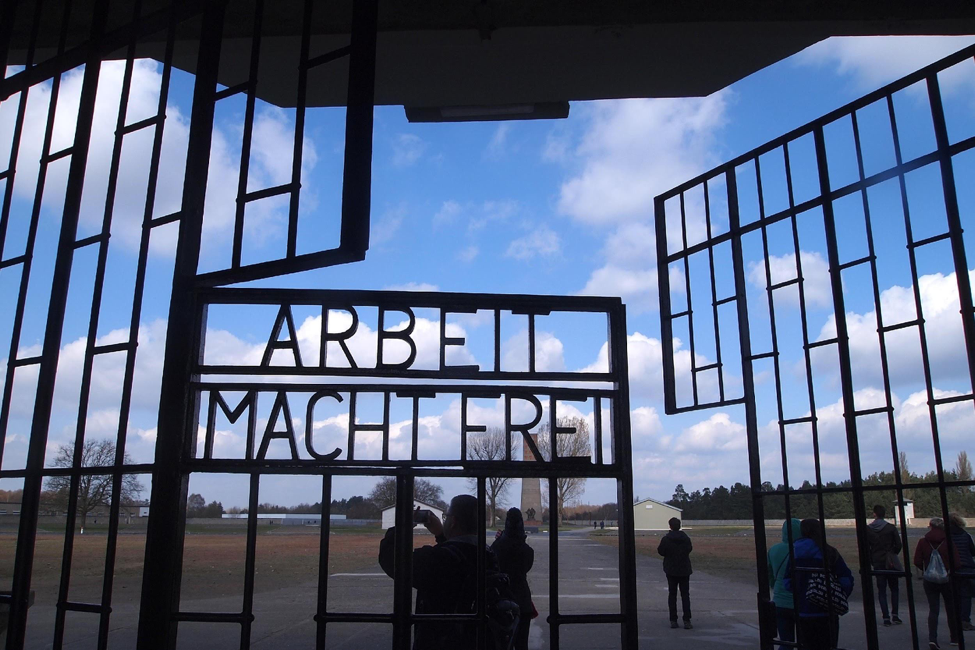 You can’t come to Berlin without seeing a bit of history, and nowhere does it come to life more than at The Sachsenhausen Concentration Camp Memorial. The former concentration camp, which was used by the Third Reich during World War 2, is a grim but important stopover for most visitors in Berlin. The memorial is less well known than its more famous counterparts Auschwitz and Dachau, but seeing the gas chambers and prisoners quarters up close is no less chilling.

Address: Tours meet in front of Starbucks at the Brandenburg Gate (S/U-Bahn Brandenburger Tor). Look for guides with red umbrellas and Sandemans T-shirts.

Opening Hours:
Tours run at 9.00am and 11.00am daily and last about 5-6 hours
Tours can be booked online or during the free Sandeman’s walking tour 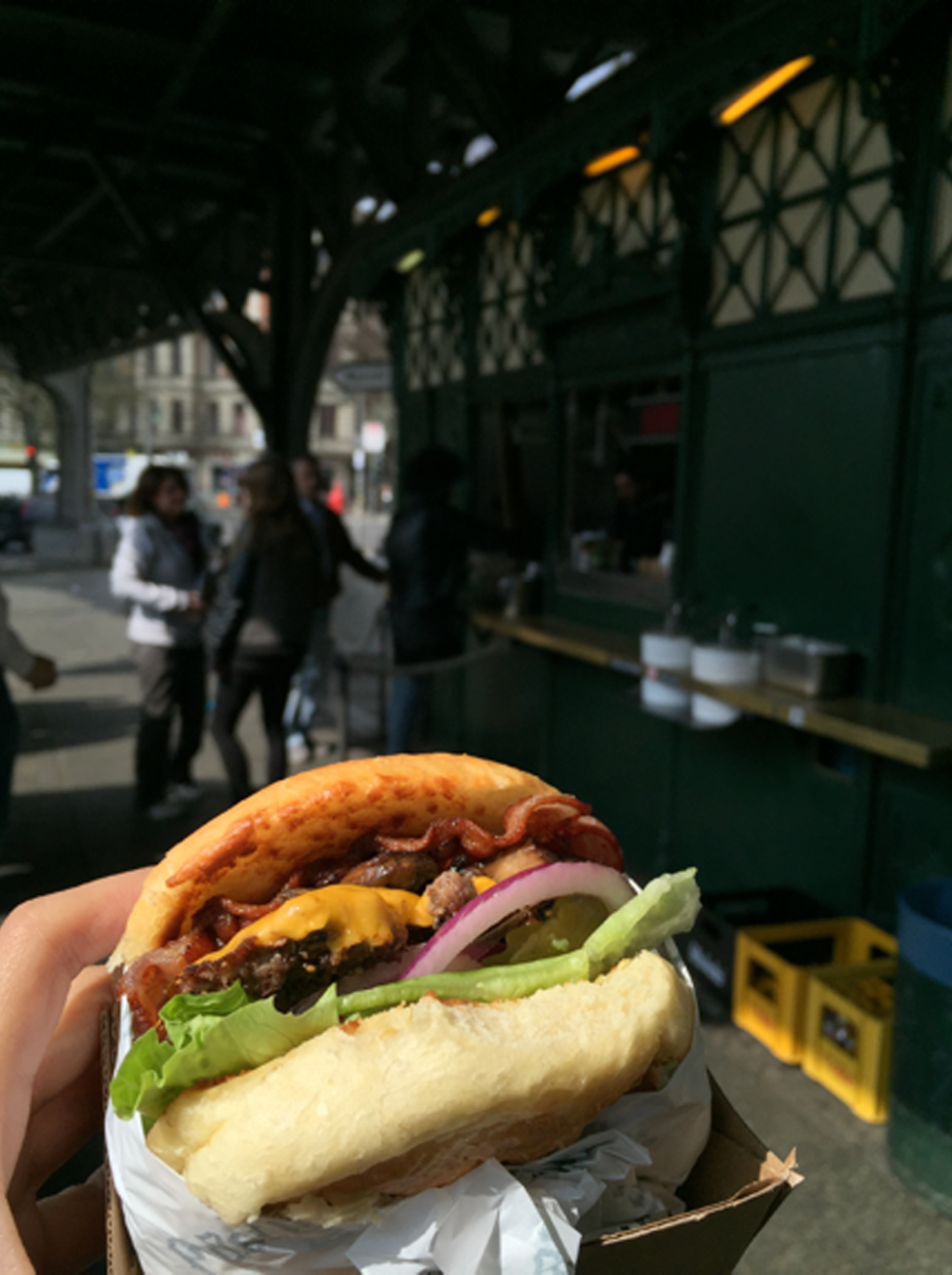 Staring history in the face can be uncomfortable, so hit up the trendy Kreuzberg neighbourhood once you’re back to unwind and refuel. Kreuzberg is full of craft beer bars, cafes and laid-back restaurants, but our favourite joint is Burgermeister -- a burger bar located under the U-bahn tracks. Perch on one of the padded railings that serve as benches, and tuck into a solid beef burger elbow-to-elbow with Berlin locals. The food is great, but the atmosphere is half the experience. 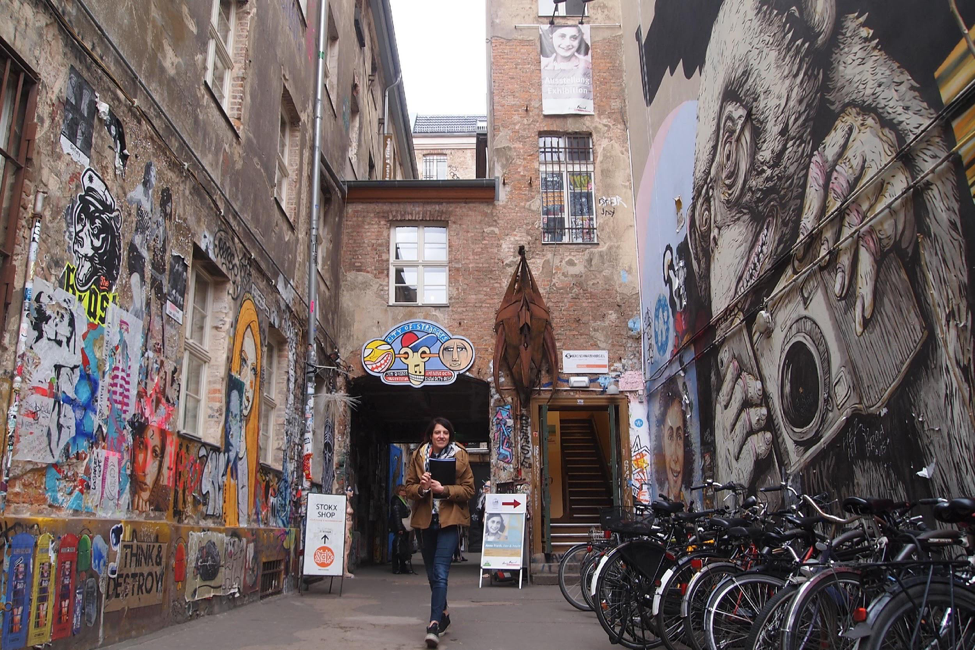 You’ve seen Berlin’s alternative culture at night on the pub crawl, now see it in the day with an Alternative Berlin walking tour that takes in street art, graffiti, and iconic artists that give the city its look and feel.

Wander into alleys bursting with colour, and uncover unexpected sights like the Young African Art Market. This urban beach along the Spree River is a beach club and gallery that hosts events such as live bands, flea market and beach yoga. The tour ends at the East Gallery of the Berlin Wall, which artists have adorned with murals depicting peace and reconciliation.

Price: Pay what you wish

*Pro-tip: We recommend taking the 11.00am tour, which will end in time for you to hop on the Red Berlin tour later. 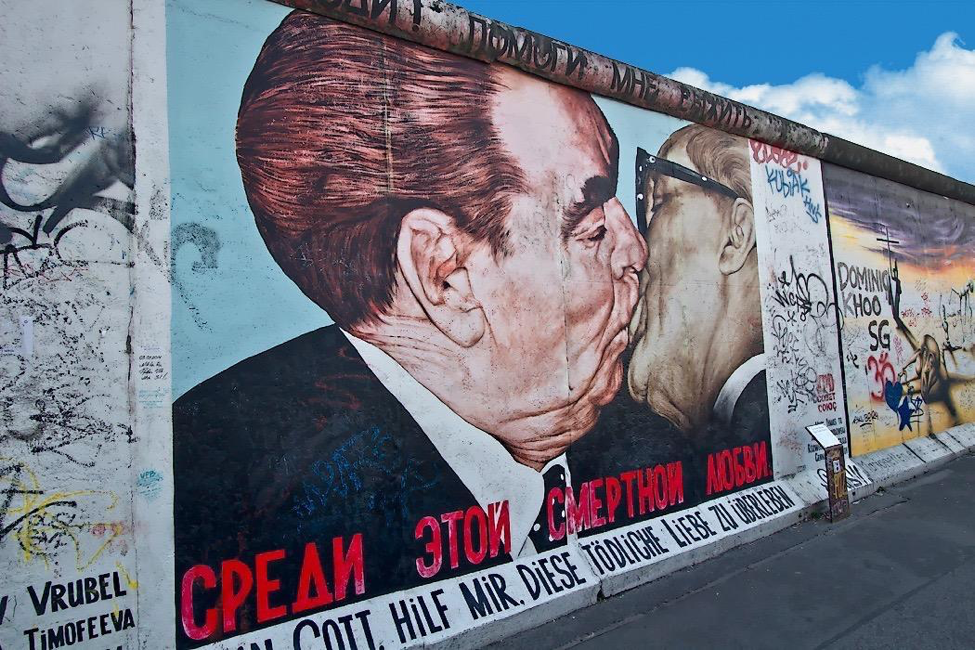 Hop on this tour for some gripping tales of Berlin during the Cold War, when the Iron Curtain kept East Berlin apart from the rest of the world. Guides will take you to iconic spots around the Berlin Wall, and tell you about some daring escapes from Soviet Germany. We won’t spoil the surprise, but our favourite story involves a zipline and the roof of a government building.

Address: Tours meet in front of Starbucks at the Brandenburg Gate (S/U-Bahn Brandenburger Tor). Look for guides with red umbrellas and Sandeman’s T-shirts.

Opening Hours:
Tours run at 2.30pm daily and can be booked online or during the free Sandeman’s walking tour

The Monbijou Hotel feels less like a hotel and more like a friend’s luxurious home, with a well-stocked library and a fireplace warming its cosy lobby decorated in dark wood. The hotel is located just 400m from the UNESCO-heritage Museum Island.

This affordable and friendly hostel, located five minutes from the Warschauer Straße U-Bahn station, is close to supermarket chain Lidl so you can load up on groceries and save on food.

*Pro-tip: Make the most of your hostel’s activities -- many offer discounts on pub crawls or walking tours if you sign up with their front desk. 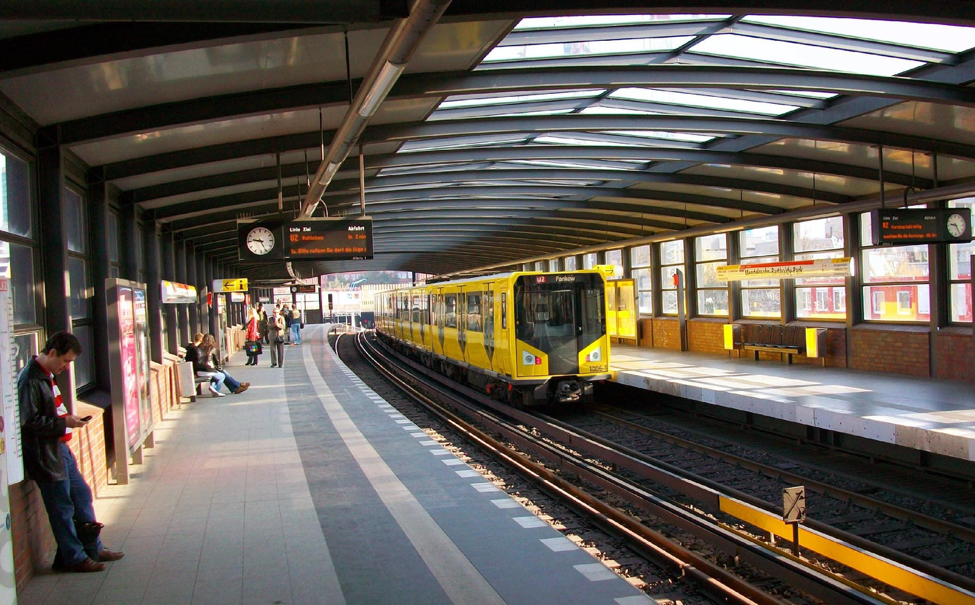 For short hops within the city, take the S-Bahn or U-Bahn trains, which both offer well-connected networks. Berlin operates on a zone system, with most tourist attractions located within zones A and B. If you’re taking multiple rides, consider buying a day ticket for seven euros, which covers both zones.

If you’re getting out of Berlin, multiple companies such as Intercity and Deutsche Bahn connect the city with other parts of Europe or Germany. Book early for discount fares.

*Pro-tip: Berlin’s trains don’t have gantries – instead, the city’s honour-based system means you buy tickets on the platform and validate them before your trip. You might be tempted to fare-dodge, but getting caught carries a hefty 60-euro fine.

There’s heaps more to see in Berlin, but you’ll have covered most of its main attractions with this itinerary, and enjoyed some of the city’s food and drink as well. Put your feet up on a plane, train or bus on your way out of the city, and give them a well-deserved break from all that walking. Prost!

*Pro-tip: If you’re an UOB Cardmember and are looking to save a few bucks, Trip.com is offering S$50 off Singapore Airlines flights to Frankfurt and Munich from now till 31 Dec 2021.

After settling your flight tickets, the next thing to think about is accommodation. UOB Cards have exclusive discounts when you book with its merchants. Enjoy 9% off hotel bookings with Expedia from now till 31 Dec 2021.

Deals aside, ensure that you’re fully vaccinated and you’ve taken a Covid-19 PCR test 48 hours before your departure. Also, don’t travel out of Germany for at least 21 consecutive days before returning to Singapore or you might be denied entry home.